The Specialty Food Association today presented the 2017 Leadership Awards, honoring industry frontrunners who have gone above and beyond in advancing food standards in society–and society itself–by creating social, economic and environmental impact through innovation and vision.

Awards were given in three categories: Business Leadership, Citizenship, and Vision. This year’s winners’ achievements range from spearheading the organic milk movement in the U.S. to supporting sustainable rice farming around the globe.

James Faison grew up visiting his grandparents’ farm in the Southside region of Virginia, but his path was not headed toward farming. He went to Harvard, then earned a law degree at the University of Virginia. In 2012, he formed Milton’s Local, which aggregates pasture-fed, hormone- and antibiotic-free meats from small farmers who get a fair price for their meats (60 percent of revenue).

Mike Brady is the president and CEO of the nonprofit Greyston Foundation and its for-profit arm, Greyston Bakery, a Yonkers-based, mission-driven enterprise that seeks to change the lives of the formerly incarcerated and other hard-to-employ people. Over the years, this nonjudgmental practice has created more than 3,500 living wage jobs.

Mark Tilsen co-founded Native American Natural Foods to return the sacred buffalo to South Dakota’s Pine Ridge Indian Reservation. The company’s Tanka Bar, made from dried bison and fruit, has created employment opportunities for the Oglala Lakota people and helped to improve their diets in an isolated land.

Ken Lee and his wife Caryl Levine co-founded Lotus Foods in California in 1995. Lotus Foods works with 4,000 small-scale rice producers around the globe and helps to educate them in new irrigation methods. During 2015, the profitable company saved 528 million gallons of water.

Albert Straus, founder and CEO of Straus Family Creamery in Northern California, spearheaded the organic milk movement in the U.S. Straus’ farm is currently comprised of 500 acres and 300 milking cows, with another 2,500 cows on nine local, organically certified farms contributing to the 16,000 gallons of milk a day for Straus Family Creamery products.

Norah Eddy and Laura Johnson share a commitment to accelerating change in the seafood industry. Their nearly three-year-old company, Salty Girl Seafood, supports small-scale fishermen and fisheries that harvest sustainably. They guarantee traceable seafood to consumers and promote stewardship of the oceans.

“These six individuals are leading examples of specialty food entrepreneurs who are truly making a difference,” said Phil Kafarakis, president of the Specialty Food Association. “In our growing industry, leaders like these are paving the way for other companies to succeed and become recognized names. It’s our honor to acknowledge their achievements through the Leadership Awards.”

Nominations were made by members of the Specialty Food Association and others in the specialty food industry. A panel of judges composed of industry experts and influencers selected the honorees from more than 50 nominees across the three categories.

More about the Leadership Awards can be found here.

About the Specialty Food Association

The Specialty Food Association is a thriving community of food artisans, importers and entrepreneurs. Established in 1952 in New York, the not-for-profit trade association provides its 3,400 members in the U.S. and abroad with resources, knowledge and connections to champion and nurture their companies in an always-evolving marketplace. The Association owns and produces the Winter and Summer Fancy Food Shows, and presents the sofi™ Awards honoring excellence in specialty food. Learn more at specialtyfood.com. 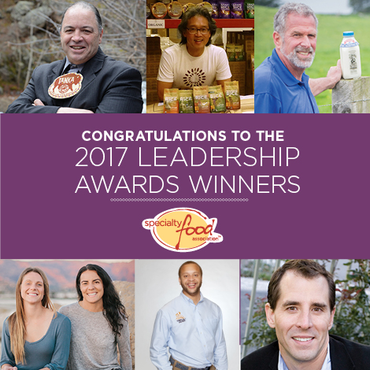